Taylor Lorenz, surrounded by her favorite posts of 2020. 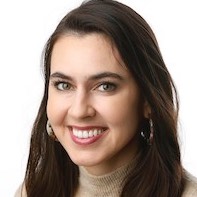 New York Times writer Taylor Lorenz is a must-read for creators and fans of creators alike. This year, she profiled the original TikTok Hype House, interviewed the man behind the Hollywood Fix camera, and tried to get to the bottom of why influencers can’t stop, won’t stop partying during the pandemic. There’s perhaps no one more online than she, so her 2020 picks reflect almost every corner of this year’s internet. (Read more 2020 picks here).

In early September writer/actor David Michael Burke posted a parody video of "Every ‘New Yorker’ in a Rom-Com…" to TikTok. It was the perfect satire of all those corny romcoms shot in NYC, and a later episode even featured a book store I used to work at. People dueted his videos and constructed a whole narrative and it turned into a whole mini holiday movie on social media. If Netflix doesn't option this by next year I don't think I'll be able to believe in Christmas.

Every white girl maid of honor speech ever

The best part of approaching 40 is being past the whole wedding boom, but this video reminded me of way too many bridesmaid speeches I've sat through in years past. He really nailed it from the way he's holding the paper, to the hairstyle, to the dress. It actually made me nostalgic for big corny weddings.

Folks, the Home Depot website has a “visualize in your home” feature for that 12-foot skeleton: https://t.co/7nbA0n3OPa pic.twitter.com/yvVtSjEJW0

Something about seeing this larger than life skeleton in people's homes was hilarious. I tried this in my own apartment but my ceilings were too low. I still really want one of these.

can’t decide if i love or hate the Long Noodle pic.twitter.com/yAD3JY2Stz

I've been thinking about this long noodle since June. Where can I buy one? How would I prepare it? What would it taste like? How would it feel in my mouth?

Back in March, while the celebs were busy recording the “Imagine” video, lifestyle bloggers all came together to produce this post. People love to hate on these girls, but I think they know what they're doing. Also, unlike other influencers, these women have not been throwing massive parties and jet setting around the country every week. I say let them live, laugh, love.

I honestly don't understand why rich people use social media. If I had millions or billions of dollars I promise me you would not catch me online. But if there was ever an argument for taxing the rich, or evidence of just how disconnected they are from our reality, this Instagram post would be it.

Taylor Lorenz, surrounded by her favorite posts of 2020.