Rebecca Jennings, surrounded by her favorite posts of 2020. 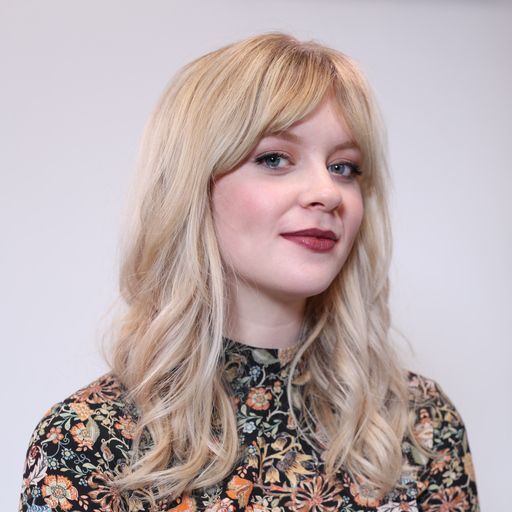 Rebecca Jennings Shares Her Best (and Worst) of the Internet, 2020

First up: Rebecca Jennings, an internet culture reporter at Vox who spent the year investigating the implosion of the Girls in the Valley TikTok house, breaking down “cottagecore,” and reporting on the racial reckoning at women's media companies. (Read 2020 picks from Brooke Berry and Alana Lintao now, and look for new lists here in the coming days.)

Me, in six weeks, talking about the plant in my living room. pic.twitter.com/z0GQt9jxg9

These are my two favorite odes to that highly specific fear in the early days of quarantine that, with no one else around to talk to, we would all start creating imagined relationships with our houseplants. Some people probably did, and I think we deserve a follow-up story on that.

Easily the most devastating TikTok I watched this year was of a hot girl bartender pretending to make you a drink while that song "Roses" bumps in the background. I watched it probably a hundred times back in April, when the idea of a sweaty, way too loud club was the only place I wanted to be. Unfortunately, it still is. :(

main source of joy is this guy who frantically guesses what color the paint is going to be pic.twitter.com/T1dQrTRWIK

I'm including my own post here only because I tweeted about how my main source of joy was this Australian guy who watches paint-mixing TikToks and tries to guess what color they’ll turn out to be, and it ended up going massively viral. It was especially wonderful because the guy ended up gaining a ton of followers and a bunch of radio interviews, and even thanked me over DM, which was so sweet. We love a heartwarming pandemic connection from across the world!

The Pandemic as Told Through Chili’s Emails

the story of march 2020, interpreted through chili's email blasts pic.twitter.com/bM5lAqlIzQ

The most cursed depiction of what the month of March felt like is this four-part image of Chili’s email subject lines. We begin in what feels like the normal world, with an innocuous invite to "join your friends at Chili’s happy hour!" Then, one a day later, we’re told instead to "order Chili’s delivery!" A few days go by, and Chili’s sends one of those "we’re sanitizing our restaurant" emails you probably got from every brand you’ve ever interacted with online. And finally, the piece de resistance: "Enjoy a FREE appetizer as you shelter in place." The best and bleakest thing I’ve ever seen.

This was maybe the stupidest tweet I’ve ever seen in my life, but I still gasped when I read it. The amount of times I have eaten a single potato for dinner and been weirdly satisfied and delighted about it is too many to count. I can’t believe other people know the secret.

My least favorite, but sort of also favorite thing I saw on the internet this year has been deleted, which is probably smart. It falls under the genre of "MAGA coping memes" that delighted the internet in the days and weeks following the election. This video, however, is exceptional in its storytelling and theatricality. Not to spoil the greatest TikTok of all time, but it’s a girl in a MAGA hat refusing to get the Covid vaccine, being put to death by the evil liberal government, and then meeting God in heaven where he thanks her for being a faithful servant. She deserves an Oscar.

Rebecca Jennings, surrounded by her favorite posts of 2020.