Alana Lintao, surrounded by her favorite posts of 2020. 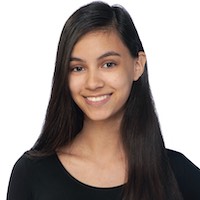 Alana Lintao Shares Her Best (and Worst) of the Internet, 2020

TikTok star Alana Lintao has earned over 230,000 followers thanks to her impressions of “quirky teen YouTubers,” and is back at it again with Vlogmas parodies in honor of the holiday season. Don’t get it twisted, though—Lintao is a huge fan of the creators she parodies, and some of them are featured in her favorite social media posts of 2020. (Read 2020 picks from Brooke Berry and Rebecca Jennings now, and look for new lists here in the coming days.)

LOVED
Charli D'Amelio’s Get Ready With Me and Maddie Ziegler

Despite the comments saying this video was awkward, it was so cool for me to see 2 of my dance inspirations in the same video! Charli and Maddie are both so iconic and I hope they collaborate again.

JoJo Siwa’s My Dream and My Nightmare

My dream and my nightmare. Lol. We did it @jamescharles

Any of my friends can vouch for me when I say, I've been the biggest JoJo Siwa stan for years now. I don't exactly fit into her audience demographic, but coming from a business standpoint, this girl is a literal genius. She has every 4-to-12-year-old girl wrapped around her finger and sells her iconic merchandise in almost every store I walk into. Seeing this different side of JoJo, courtesy of James Charles, was super unexpected but so cool!

Join me, @pokimanelol, @hasanthehun, & more on Twitch TONIGHT as we help folks make a voting plan at https://t.co/TskRLfhCt3 and officially declare orange sus on Among Us 🍊

Back in October, Congresswoman AOC encouraged young people to vote by playing Among Us with popular Twitch streamers. This stream was so entertaining and so funny. Who would've thought AOC would be in the same live stream as social media stars like Pokimane and Corpse Husband!

I know almost nothing about Kylie, but I absolutely LOVE her baking videos with Stormi. This video was so cute and festive!

Sophia Grace & Rosie’s I Hope They Catch These Thieves

i hope they catch these thieves. so messed up #fyp #WildAnimals #selenanetflix #euphoria

I can't even begin to explain how much I've laughed at this video. I don't even know why this cracks me up! I think it's how they sped up the video and how determined Sophia and Rosie look.

I think I can speak on behalf of everyone when I say, no 30-year-old should be talking to a 16-year-old like this. ESPECIALLY publicly online.

Alana Lintao, surrounded by her favorite posts of 2020.