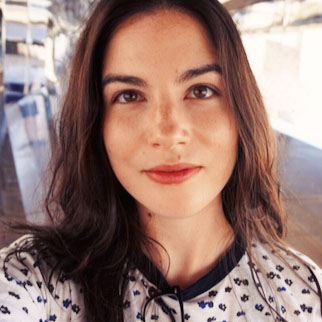 There’s a moment two minutes into an episode of Back-to-Back Chef, the YouTube series hosted by Bon Appétit Editor at Large and 2020 James Beard Award winner, Carla Lalli Music, that encapsulates why the show has amassed a cult following. The premise is simple: Music and pop star Troye Sivan have 20 minutes to each prepare a recipe called Chicken Under A Brick, standing back-to-back, as she coaches them through the process.

There they are: unable to see each other, raw chickens resting sideways, with Music instructing Sivan to bend the leg backward.

“I know it seems a little gnarly,” she says.

But Sivan does as he’s told, closing his eyes anxiously. And suddenly: pop. The hip joint dislocates.

“WHOA,” he declares, looking slightly stricken. “I did not expect that.”

She asks him how he feels about doing the other side, likening it to breaking the spine of a book.

“I think I can do it now,” he says, exhaling. He has already, in his nervousness, swiped his chicken-hand through his perfectly tousled platinum locks (“Troye just touched his hair after the chicken and I’m dying,” reads one viewer’s comment). He’s trying to pull himself together and his range of emotion—excitement, doubt, confidence—all come viscerally through the screen. He is no longer a celebrity: he is the personification of the amateur home cook. He is, in other words, just like you.

The video, which has more than 2.7 million views, still trails behind the 3.9 million for Music’s back-to-back with NBA player DeAndre Jordan and 4.7 million for her vegan carpaccio with Natalie Portman. The irreducible nucleus of them all is a tension that mimics the opposing impulses that often pull at home cooks testing new recipes—the desire to surrender to the process and the inability to leave the stove’s side because … how will it turn out? Will Hailee Steinfeld’s pommes souffle puff as Carla’s do? Will Elizabeth Olsen’s butternut tempura stick together?

In the three years since the magazine’s test kitchen launched a YouTube Channel that now boasts 5.9 million subscribers, its team of chefs have become public figures who are regularly stopped on the street. “I still think people are asking me for directions,” says Music, who, per The New York Times, has emerged as “everyone’s favorite aunt.” She never seems to step into a persona or bubble over in hyperbole. She’s the chef who just wants to see people succeed. She also just won a James Beard Award for her first book, Where Cooking Begins: Uncomplicated Recipes to Make You a Great Cook.

Prior to her eight years at Bon Appétit, Music spent two at Martha Stewart’s Everyday Food, worked as the first General Manager of Shake Shack, and as a line cook at Rocco di Spirito’s Union Pacific. Her love of food stems from the Italian-American home she grew up in, where her mother, a cookbook editor for Simon & Schuster, approached food as “part of the daily pleasure of your life.”

Music recently took a break from newsletter-writing procrastination at home in Fort Greene, where she lives with her husband and two sons, to talk about her upcoming second book and finding joy in the kitchen amid COVID-19.

Having worked on the operational side of restaurants, what’s your read on the landscape right now?
It’s pretty devastating. I’ve thought a lot about restaurants that just opened. Places like
Verōnika, places with insane opening costs. To be open for two months and then close …. I just don’t want New York to reopen and the only people who can re-operate are the big-box restaurants. It’s either going to be all fast-casual chains, or people who can operate with the kind of capital backing that makes for not the kind of restaurant I want to go to.

What was your last pre-pandemic restaurant meal?
I met a friend for drinks in the city at Rosemary’s in the West Village and had a couple glasses of wine. I got back to Brooklyn and realized that my kids were going to be at the end of having dinner. It was sort of a hectic time. I was a little bit drungry and didn’t want to go home just then, so I kind of selfishly was like: I’m gonna keep this little time for myself going. I went to a new pizza place that opened on Myrtle, got a slice of pizza and a seltzer and sat in the back of the slice shop, and called a good friend of mine.

People are actually in the kitchen, finding joy there now. Which is your world.
It’s actually the most home cooking I’ve ever done, too. I didn’t get to eat dinner with my kids during the work week—they eat at 5:30 or 6. So I feel like we’re getting a year’s worth of our weekend meals. I’ve been picking up Raven and Boar’s pork chops from the farmer’s market. Marlow & Daughters actually just started doing seafood pickup, so I tried their seafood box, which was from Greenpoint Fish. But we pretty much have pasta fagioli every Sunday—it’s a recipe [from] my first book, Where Cooking Begins.

"After [the first episode], I sat down with the team and was like, 'Nobody wants to watch me be a dick to a celebrity.'"

And you’re working on book number two, right?
It’s going to come out in October 2021. Instead of being organized by ingredient, it’s 100 recipes [arranged] by the times in our life when we cook. The first section is Monday through Thursday. And then there’s Friday and the weekend. When you’re cooking during the week, you hustle for half an hour and then eat. On the weekends, you hustle for half an hour and then wait five hours for the thing to finish cooking—braises, long-cook soups, lazy lunches. So that’s the idea.

Home cooking is in your DNA. What foods and smells are most nostalgic for you?
The smell of olive oil and garlic, which is still how more than half of everything I cook starts. Linguine with clams is something my family has every time we’re together. Also things like soft butter. Our container of butter was always out on the counter and my mom used a lot of it. She was never like, “This is gonna be a lot of butter!” There was butter on my sandwiches. Toast with butter that was all sunken into the bread. There was no guilty food.

The recipes on Back-To-Back are not necessarily easy. What’s the vetting process?
The thing that I always want to preserve is that there’s some differential between me and the guest. There have been people who are pretty good cooks. Lizzie Olsen—she was like, “You can call me Lizzie”—she’s a very capable cook. So was Eric Stonestreet.

That sole meuniere recipe.
I thought that was going to stump him with ripping the skin off the filet. He finished before I did and I was like: “Fuuuuck.” If the recipe is too easy for them, then there’s no challenge for me. If I’m not challenged, then there’s no tension. Sometimes I’ll choose something that I think is pretty straightforward, like Pommes Souffle, which has so few variables: potato, oil, salt. It’s all technique. But when we started cooking, and Hailee [Steinfeld] got stumped after I said to cut the potato lengthwise, I was like: “Ohhhh shit.” We hadn’t even picked up a mandolin. During that shoot, I was sweating.

The tone is noticeably different in the first episode you did, with Marlon Wayans.
At the beginning, the concept was different. It was a celebrity chef and an ordinary person. [The production team] had [shot a pilot] with Gordon Ramsey that is still the most popular one in the franchise because it’s fucking Gordon Ramsey. For the very first one, the coaching I got was to be like Gordon. It was all about having a differential between the finished dishes. They were like: Be hardcore about it. Keep reminding him that we’re running out of time. And I tried to do it. But it was so out of character for me. Afterwards, I sat down with the team and was like, “Nobody wants to watch me be a dick to a celebrity.” When we made the switch to the goal being our dishes looking the same, the viewer started having this empathetic, shared relationship with the celebrity.

When you’re back in the kitchen, who are your dream next contenders?
I was on a big Harry Styles kick when his album came out. I’m very enamored with him. Tilda Swinton would be incredible. Lizzo. Rachel Maddow would be a dream for me. At one point we were actually talking about Elizabeth Warren [and] I had fun trying to come up with a recipe that [reflected] her small donor stuff. So, what would be a dish where a lot of tiny things add up to a big thing? A dish like risotto.

Do you get pushback for political stuff?
People really don’t like it when you get political. I posted a few things that made it clear I’m not a Trump supporter and I’ve lost followers but I do not care. Sometimes people are like: “Disgusting!” “Stick to food!” And it’s like: You can unfollow me at any time.

How do you deal with trolling?
I’ve been pretty lucky because people know I’m older and have a family. I think that has made me invisible to a lot of gross sexual trolling. I don’t get dick pics and stuff like that. In the beginning when people were direct messaging me on Instagram, if I didn’t follow them, the image was blurred. For a long time I’d be like: I don’t know what it’s gonna be! Every time [the photo] was just a pie. When the YouTube channel started, people were a lot nastier. They didn’t really know us and I used to read the comments because I was trying to figure out what was connecting. But I just stopped looking. The worst is when someone says something that hits on your own insecurity. People who didn’t like my voice. A lot of men have issues with women’s voices. Then I would get self-conscious: was it nasally? Was it whiny? Or New York-ey? Or whatever the fuck people say.

Meme Apetite says they would cast Sarah Silverman to play you in a sitcom. Who would you pick?
I love Sarah Silverman, I was into that. I love Jenny Slate. Either of the girls from Broad City, I would be honored.

Are there any shows you’ve been binging during quarantine?
Killing Eve. Insecure. And I had never watched Real Housewives ever. I don’t know why in quarantine I was like: That seems like something worth watching! Like The Sopranos—something with many seasons. So I started watching Beverly Hills, Season Two. They all have purple Blackberrys. It makes my brain turn into pea soup and I’m kind of OK with it.