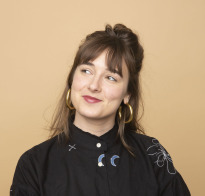 How I Finally Fell Out of Love With My Tradwife

Throughout the pandemic, I’ve grasped at a number of coping mechanisms: Sourdough bread baking, intricate skincare routines, but perhaps most obsessively, tradwives. I first wrote about the latter phenomenon almost two months ago, when I was deep in pre-election anxiety and a vaccine had yet to emerge. I was taking inspiration from their ability to bury their heads in the sand and live like it was 1800, cooking butternut squash soup and forlornly walking through fields—while, of course, capturing it all on Instagram for their tens of thousands of followers. But the spell has been broken.

Over the past few weeks, my friends and I had been swapping the increasingly deranged posts of the tradwife who started it all for me, a fellow graduate of my college with over 30,000 followers. She was posting Instagram stories of her children near knives and on the tops of precarious stools, and then a video from inside a store in which none of her family was wearing masks. I guess I should have known what was coming.

Over the weekend, she threw a birthday party for her three-year-old son, and proudly posted a series of photos of the indoor gathering.

“This is what the enemy is trying to thwart … Gatherings where we remember that life is NOT solitary,” she captioned the photos. “Isolation has created more mental sickness than it has prevented physical sickness.”

There it was. The COVID-denying center that I think I always knew lurked under her facade. The inaccuracy of that last sentence cannot be overstated, and my friends and I were aghast. One of us had to comment:

“I appreciate the desire to connect in these difficult times but covid has killed 200K ppl in the US alone,” my friend wrote. “When you gather in large indoor groups you become an active threat to everyone around you.”

That comment was deleted by the tradwife after less than a minute.

The post remained active, and commenters kept posting similar criticisms to the ones in my group chat. They were simply removed, or brushed off by the tradwife in her replies—including one posted by someone claiming to be a Christian cancer patient, who disputed the tradwife’s comment that “even those with cancer, who know Christ, would agree” with her caption.

“Wow I know you’re into 1800’s living but I think the disease spreading is taking it a hair too far,” another follower wrote. The comment was deleted.

“I wonder if you know anyone who has COVID?” another asked. “I do. It’s hard to imagine you sharing this same message if one of your dear sweet family was directly affected by this pandemic.” Deleted.

Reading the words “I just know Jesus would not be social distancing” cemented what I had already suspected: my tradwife fun was over. I had used the accounts to escape from reality, but instead saw the ugliness that ignoring reality leads to. It was time to unfollow.

That’s an easier pill to swallow on this side of the election, I’ll admit. But with the winter months sitting between now and widespread vaccine availability, I’m feeling somewhat bereft without a new coping mechanism to cling to. I guess there’s always Pinterest.