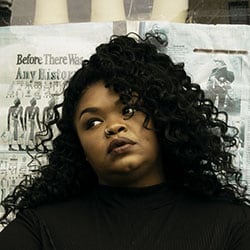 If I want a foolproof way to maximize likes, reshares, and engagement on one of my Instagram posts, I know exactly what to do: upload a photo or video of myself in a swimsuit, lingerie, or a tasteful nude. Without fail, the more skin I show on social media as a plus-sized content creator, the more people stop scrolling to let me know how they feel about it. The feedback is usually positive and, on the one hand, it’s great—certainly better than being mocked and ridiculed by fatphobic trolls or hyper-sexualized by creepy straight dudes, which is what often happens in response to fat women who aren’t covered up.

Social media has become a breeding ground for body shaming, fat fetishists, and heralders of unrealistic body standards, but it has also offered a reprieve. Communities of fat influencers, advocates, and activists have gathered to uplift one another, offer solidarity, and celebrate bigger bodies. They have helped to normalize fat women in crop tops, underwear, and birthday suits. These are my followers: like-minded individuals who value my content because I’m confident in my skin. But as their numbers continued to grow, it didn’t take long for me to realize that the body positive audience that I’d built was also hyper activated by my bareness.

In this case, it’s deeper than a classic “sex sells” conundrum. I’m honored to report that over 85 percent of my followers are women. It’s extremely rare for my comments to include flirtation, lustful undertones, or overtly sexual content. Rather, the people on my page are eager to encourage and gas me up. The compliments, heart eyes, and flame emojis runneth over. And I’m certainly not the only fat girl on the block experiencing this.

Higher engagement can be “a form of objectification within the ‘bopo’ [body positivity] movement,” says Ashleigh Tribble.

Plus-sized YouTuber, actress, and brand ambassador Stella Williams sees a certain “shock factor” in her audience’s response to not only seeing her in bikinis, but even in just skintight dresses. Williams identifies with an underrepresented sector of the plus-sized community: apple shapes. She said that her audience reacts so strongly to seeing her in sexy dresses  because they are “really happy just to see someone who looks like them, not giving AF.” Despite the reality that so many of us have bodies that fall outside of what it considered sexy or “normal,” we aren’t used to seeing it represented in our media, social or otherwise. When we let our bodies stand out, people notice.

Ashleigh Tribble’s personal Instagram account also serves as a dreamy mood board for fat femmes. With over 71,000 followers, she often reposts sultry photos of bigger bodies and captions full of useful sexual information and dating perspectives. According to her, “more flesh is being presented in an increasingly sexual way in order to communicate different layers of online identity.” But Tribble recognizes that there are few places that are fully immune from dehumanizing eyes. She says that the higher engagement on posts containing fat nudity is “a form of objectification within the ‘bopo’ [body positivity] movement” that “seems safer to participate in online.“ In other words, it’s less likely that a festishizer will be called out for noting how sexy a fat woman in a photo is when there are 50 other comments expressing similar sentiments, perhaps for different reasons.

But not everyone who praises our nude selfies view us in sexual ways. Our job, to help fat people see themselves online, is complicated. Curve model La’shaunae says the task of uplifting others can feel daunting, if not downright discouraging. She told me that as a “bigger fat,” she also finds that her 166,000 followers pick and choose what content they want to support, and often lean towards those where she is being “over the top” or in lingerie. “A lot of the time it truly makes me feel like my work will never be taken more seriously because people only see me as an object for their ‘body inspiration,’” she says.

“I don’t know if they’re in solidarity or if it’s just because it’s more flesh showing.” —Kellie Brown

It’s hard to figure out where you stand when you represent things like liberation, confidence, sexiness, and self-love to so many other people. Kellie Brown has worked on both sides of the screen, first as a PR and marketing executive, and now exclusively as a plus-sized influencer and the genius behind And I Get Dressed. Now that she’s mastered the social media space, where the infatuation with nudity is alive and well, Brown isn’t sure what to make of it. She recently posted a photo of herself in a bikini, and it has since become her most liked photo. “I don’t know if they’re in solidarity or if it’s just because it’s more flesh showing,” she admits. “Probably a combination of both.”

I’m inclined to agree. It is certainly revolutionary that I post any part of my bare body when fatphobia tells us all that it’s not good enough and should be covered up or changed. I’m happy to cut through that noise to offer fat women a more freeing alternative. However, as a fat woman, things like traveling, pursuing certain careers, advocating for quality medical care, battling the fat tax, and even just leaving the house are also acts of rebellion. Focusing on beautiful or "shocking" photos of fat women’s bodies isn’t enough to actually challenge fatphobia. Admiring our bodies doesn't change how we're treated on airplanes, at hospitals, or in stores. We are worth more than our pounds of flesh.