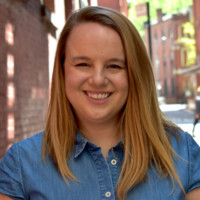 A well-made TikTok can have the feel of a mini-documentary. Such was the case with Fatini Zamri’s video that went viral in early September. In just under a minute, she shares the story of her business, LushPins. In the video, we learn that  Fatini, who lives in Malaysia, isn’t able to study overseas after earring her diploma (a degree similar to an associate’s, or finishing your first year of college in the U.S.). Feeling lost, she finds purpose after a cousin compliments her “pinrings,” a pair of earrings she had remade to pin into her hijab without pulling or tearing.

Based on the positive response from family, Fatini launches LushPins, teaching herself every aspect of the business, from packaging to distribution, as she goes. But, despite her hard work, it doesn’t take off, and she stops posting.

Which brings viewers up to the current moment, when she has decided to try again. In just a few seconds, we’ve been taken on a journey, from low to high to low again. At the end of the video, Fatini is hopeful: Someone you want to root for, whose business you want to support.

As it turned out, that was exactly what happened. Right now, the video has over a million views on TikTok, with more on Twitter, Tumblr, and Instagram.

While large companies have fired employees who share behind-the-scenes looks at their work, small business owners like Fatini have found ways to use the platform to add a very human element to their business. But for Fatini, TikTok is more than just a place to share videos. She found it to be a place to learn from small business owners as well as promote her own business.

“The business TikToks include videos of behind the scenes process, meet[ing] the team, packaging, designing, product photography and so many more,” Fatini, who speaks English as well as Malay, explains over email. Even more mundane videos, like how to package products, proved helpful. She was particularly inspired by one Malaysian businesswoman sharing how she got her scrunchie business off the ground. (Her post had about 36,000 views when Zamri found it.)

While Fatini was learning from other TikTokers, she was only having modest success with her own accounts. “There was a few attempts of me trying to make Tiktoks about LushPins, but I did not do it well in terms of song choice, hashtag, and trending challenges,” she says. “So I decided to just have fun with it.” After creating several posts while on break for school, she saw the song “You Got It” trending. While there was no specific challenge associated with the song, the lyrics resonated with Fatini. She used footage she had already shot to create a video.

She hoped it would get around the same amount of views she was used to—2,000 or so—and maybe spark a discussion in the comments. Instead, the video went viral on TikTok, and beyond. Friends of friends were seeing it on Twitter, Tumblr, and Instagram. People at her dad’s office and mother’s friend group saw it. As the message spread and people on Twitter found her TikTok, new followers came in from everywhere. So far, the response has been overwhelmingly positive, though Fatini admits she hasn’t had time to read all of them.

But has all that goodwill actually helped her business? In a word: Yes.

“It changed everything for LushPins, not only in terms of how the company operates but also how it can grow in the future,” Fatini says. LushPins now has supporters all over the globe who were touched by Fatini's story and want to see her succeed. While that means more sales in the short term, Zamri also has plans for the future. She would ultimately like to design her own pinrings instead of simply adapting existing earrings with straight-pins, something she didn't think was possible before her video went viral. She’s even thought of ways she could expand products beyond pinrings to other products that could be helpful to Muslim women, like hijabs or even a clothing line. Whatever is next for LushPins, however, Zamri can rest assured knowing she has fans around the world already cheering her on.