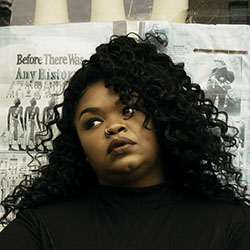 Verzuz TV creators Swizz Beatz and Timbaland weren’t the only ones who capitalized on people’s increased screen time during the pandemic with an innovative and lucrative idea for Instagram Live. Serena Fucking Kerrigan had just quit her job as a video producer at Refinery29 (where we met over three years ago), was stuck at home like millions of other people, and  was really single. So she started an original live dating show called Let’s Fucking Date.

She’s since wrapped two successful seasons of LFD, snagged sponsors, and even released a card game based on the series. SFK has also nearly quadrupled her own following by sharing advice on how to be more confident, flexing in Manhattan and the Hamptons like the true New Yorker she is, and serving looks with her signature blonde hair and red lip.

We chatted, via Zoom of course, about our old stomping grounds and why she left them behind, building a brand, and how the middle name “Fucking” is key to her success.

How did you end up going freelance after Refinery29?

I knew my potential and I felt like there was a lot of waiting and convincing [I had to do at Refinery]. I was just stifled. I knew that I was going to be a star. I always knew this since I was a little girl and I was willing to do the fucking work. I was an intern for a year and I was producing my own show on Facebook Live, I was producing 60 assets a month for Facebook. I was willing to do the work but there was no ladder. There was no [clear path towards a] promotion.

I don't feel any resentment about working at Refinery29. It taught me so much. It taught me to work my ass off. It taught me to create my own opportunities. It taught me a lot, also, about my privilege and how I have to amplify other voices other than my own. Something else I got was the network of people. Two people on my team for Let's Fucking Date came from R29. It was such an amazing group of creatives. But how is it that the majority of them felt so stifled by their experience there?

All of this is public knowledge now, since Refinery had such a huge reckoning this summer.

100 percent. It just got to a point where I wasn't being valued and as a result I started to feel insecure about my potential. But it was great, because I [realized] the only person that's going to believe in me as much as I believe in me, is me. So you have to just go after it.

A lot of the toxicity just taught me how to be a better leader. Now I'm very transparent. I talk about money. I talk about what I can afford. I have my assistant at meetings talking about revenue because I don't ever want her to feel she's being taken advantage of. I'm very clear that [a number might seem big] but with taxes, managers, and everyone I pay, it's not as much profit as you might think.

I learned so much about how to be a good leader and who to hire. I intentionally hired a Black woman to be my producer on season two because it was going to reflect in the casting choices. It's important to have a diverse voice in this brand that I'm building. I can't be preaching about female equality when it's just a white woman in charge.

"If you don't have a story, no one is going to engage. So it's so important to throw shit out. Every single creator will tell you their first podcast, interview, or video wasn't good ...You get better as you go."

How did you land on confidence and dating as your niche?

I changed my middle name to “Fucking” when I was a freshman at Duke. Obviously I didn't [change it legally], but it was really important to have this dialogue with myself: You're Serena Fucking Kerrigan. You're the bad bitch. That constant reaffirming voice really helped me. From there I created this persona, SFK, who is the baddest bitch; who uses the sidewalk as her red carpet. That really helped me with my confidence.

[I produced] a show for Snapchat called Taboo [where] I interviewed different people about taboo topics. I realized I had this gift to get people to open up about really intense topics like abortion or peeing in the shower. I loved empowering people to tell their stories. I realized that that was my thing.

SFK made me fearlessly myself [and I wanted to] make other people feel fearless about being who they are. So that's where [the brand] really started to take shape. I think so many people think that to build a brand, [you create] the whole thing overnight: the font, the logo ... No. It's telling a story and creating a character. You just have to take it day by day.

The dating thing ... I never thought I would be a dating expert or a dating anything.

[Both laugh.] So much of dating is about confidence. It's about being confident enough in yourself to say who you are. To not be afraid they're gonna leave, because you deserve someone who's gonna fucking stay.

Let's Fucking Date was born out of the fact that I was alone in my apartment in a pandemic when I had just quit my job less than a month before, I'm single, and everyone was going live on Instagram. I was like, I worked on a live team. I should do this.

I realized in my shaping of this show that dating was so aligned with confidence. You cannot date until you really date yourself, love yourself, and really nurture that relationship.

You’ve tripled your following since embarking on this journey. What best practices would you suggest for someone brand-building?

[Focus on] the story and engagement from your audience. Really developing a relationship and trust with them is the most important thing. If you don't have an audience, who gives a fuck about your logo? Who's going to see it? If you don't have a story, no one is going to engage. So it's so important to throw shit out. Every single creator will tell you their first podcast, interview, or video wasn't good. In the first LFD episode I had a fucking eye mask on because we thought that would be fun. It was stupid, but no one cares. You get better as you go. People get so caught up in the beginning on making it perfect when literally none of that matters. Go for it and just do it. It evolves over time.

"I've worked with a lot of people in the industry and I'm sorry but the drive that women, people of color, LGBTQIA folks have is just... You just get such fresh ideas and voices."

That’s so true. I think part of the reason is information overload. There's an article or video that will show you how to do every part of any production perfectly and professionally. People want to watch and read everything and hit every single point.

I get it. I've been there. But why are people coming to your fucking podcast [or platform]? They're not coming for a fucking logo. They're coming for a conversation, they're coming for the guests, and the only way you're going to get better guests is if you put it out. I think the best thing is to just put fucking content out. I am the most obsessive but I've learned to really try to let go.

Yes, I love seeing you give advice to people when you're not dolled up. So genius.

It's about the brand. I have these content buckets for SFK. She likes doing the glam, but also gives real tough-love advice. She's Latina. She's from NYC, very Gossip Girl. She now has this cooking thing that she fake does. You can build a brand around a character. Having these different buckets that you can tap into are really important to define yourself.

Also, don't look at what anyone else is fucking doing because no one else is you. I think the argument that "everyone is doing it" is total BS. That's a cop out, honestly.

Tell me more about building out your team. Part of that information overload is a pressure to be completely DIY. Why was that so important? And how did you do it?

I started with: I need an intern. That led me to someone who was going to business school and didn't even want to be paid to help me with my business. She led me to an assistant and someone to do marketing. It's not like you have a full team in one day.

I thank my team because from the get go, I was never really making my own content. There was always a group. Before LFD, my managers pitched me well, but brands would ask: why are her rates so expensive? When my manager would tell them that I hire a team, they wanted to know why I couldn’t do it myself. I'm really good talent and I'm a good director, but I'm not going to edit my own fucking videos. Why? I want quality content. I want to hire people who are better at what they do than I am.

Season two of LFD was so special to me, even more special than Season one, because there were so many people involved in this project. It's way more fun for me to be in a brainstorm. Even the card game was a total collaboration. You think I came up with every question myself? Fuck no. I am the face but it's a fucking train of people. It's also a very diverse group of people. I've worked with a lot of people in the industry and I'm sorry but the drive that women, people of color, LGBTQIA folks have is just... You just get such fresh ideas and voices.

What I've learned is that instead of trying to hire one person to catch it all, it's really best to have people good at one thing. There's one woman who does all my emails, because I get probably 500 emails a day. My day to day assistant/stylist is on set with me. I noticed very quickly that she loved styling and [now she reaches out to brands and creates style guides]. We hired a girl that's in college to do Twitter because that’s her lane.

No one's full time working for me except my assistant. I hire independent contractors.  For everyone, this is their side hustle or they have another job or they have other shit going on. I firmly believe this, though: you have to pay people. Not just because of legality and respect. If you want the best work, fucking pay people. The real thing is to start small, project based. Right now I don't have anyone on salary.

What’s next for you? What are some of your dreams and goals?

I'm obviously going to be on the cover of Vogue and [attend the] Met Gala. I'm kidding ... but I really am going to do those things. I really want people to think of confidence and think of this brand. I want to empower women around the world. I want them to love themselves. I want to heal. I want them to know you live once and you have nothing to lose.