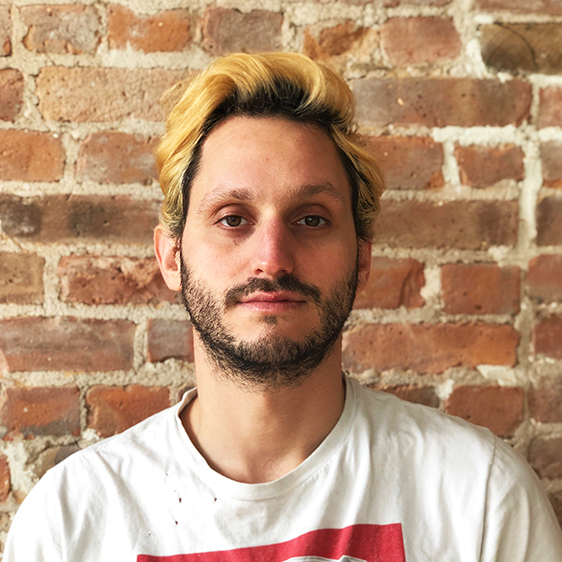 Defined in the narrowest of terms, Throwing Fits is a popular podcast about men’s fashion. In spirit, it’s more like a rolling conversation about what it even means to be alive today. Lawrence Schlossman and James Harris—self-described “grown dirtbags” pondering the “zeitgeist”—discuss passions, brands, and jawns with guests, celebrity and not, who always sound happy to spend some time in their strange extended universe.

In 2019, after two years of running an iteration of the podcast with the derided Barstool Sports, Schlossman and Harris went independent with Patreon. In mid 2020, they both left jobs (Schlossman was brand director at Grailed, Harris VP of content for Def Jam Recordings) to Throw Fits full time. To their delight and amusement, they were recently profiled by The New Yorker.

In the weeks since the murder of George Floyd, and during the ensuing nationwide protets, Schlossman, who is Jewish, and Harris, whose father is American and whose mother is Japanse, have pivoted to focusing on the larger questions of social and racial justice. Says Schlossman: “Whether it’s an activist like Patia of Patia’s Fantasy World, or a leader within the streetwear community like Chris Gibbs, or a young black creative small business owner like Saeed Ferguson — it’s about having the guests on that can make the biggest impact.”

Was there a particular moment when you realized your regular approach to the podcast was going to have to change?
JAMES: We had a big episode [with a high profile guest] lined up, that we were excited about, that addressed COVID-19 and the quarantine. But it was clear that was no longer the most pressing issue. It was a no brainer. On text, immediately, we were like, “Yo, this is not our time to talk about things beside—actually it’s not our time to talk, period.”

LAWRENCE: One benefit that we have in this version of the show, where there’s no media conglomerates [backing us] and we are beholden only to ourselves, we have the luxury of being able to do what we feel is right and true to us. So we immediately shelved this big episode. The big thing for us now is: education and amplification. That’s what the show can do. Moving forward, it’s just going to become another pillar of the show. It can stand next to jawns enthusiasm and, you know, conscientious consumption. This is the new normal.

JAMES: I think social media is going to be, as a whole, completely different. Instagram is not going to be the shiny beautiful veneer that it once was. You see this already with Gen Z. The activism is very much a part of their day-to-day. And it’s almost trickling up. So the podcast is developing, or evolving, as the larger digital zeitgeist is. Stuff like Black Lives Matter and racism and misogyny and sexim—that’s come up on the podcast [in the past], but in a more ad hoc way. Lawrence and I, what we’re trying to figure out—week by week, day to day—is how can we fold this into the other things that the podcast concerns itself with? Let’s make caring about progress and social justice and humanity one of the core pillars of the podcast.

LAWRENCE: We’re trying to do what feels right and honest. We don’t wanna come off as posturing. These are things that we care about off-mic.

The conversation with Patia did feel like it made sense in the context of the podcast.
JAMES: She’s been on twice before. She’s already a homey and through her experiences she put together this incredible resource list. [The Fantasy World Master List of Resources On How to Dismantle Systemic Racism]. Through humor and entertainment, [she provides] an accessible portal to these more important things.

LAWRENCE: Patia touches on systemic racism through the lens of humor—not all of the jokes are about foreskins.

Has broadening the lens of the podcast made you worry about a possible financial impact from losing listeners?
JAMES: Our prevailing philosophy is like, ‘Yo, fuck ‘em.’ If they dont wanna listen to this, and empathize for the betterment of humanity—we wouldn’t even want your money, and we wouldn’t want to cater to you, or to sit alongside you. The risk is mitigated because we’re at a decent cruising altitude. We know for sure there’s gonna be a dip. But we’re still able to feed and clothe ourselves.

LAWRENCE: It would be a lie to say that we haven’t thought about how this would affect the business. That’s just conversations we’re going to have as the small business owners of Throwing Fits LLC. But to James’s point, if someone is too obtuse to see why it’s necessary for even a fucking dumb podcast about jawns to get involved, because of the platform that we are lucky enough to have, because of the listeners—if they don’t get that, I don’t want that person’s money.

Your show is obviously inspired by rap music and rooted in the vernacular of hip hop culture. How are you reckoning with the ethics of that?
JAMES: Black culture is the dominant force in America but the purveyors and progressors of Black culture do not reap the benefits that they should. It’s systemic: Black people are excluded from the economy of America through physical segregation and racist banking and housing policies. The question of how do we kind of grapple with that—that’s something we have to individually face. Our audience, a lot of them are white men and women that co-opt Black culture, and it’s just a one way street. They’re just taking, they’re not giving back. Even acknowledging that they’re co-opting black culture is not done. And by them, I mean us as well.

LAWRENCE: The first step is acknowledging what’s happening. Let’s explicitly be clear and acknowledge the dominant culture that informs what we do. Hip hop has been the dominant art form. There’s a lot of work that can be done. For us, the show and the listeners, that starts with independent Black- and brown-owned and designed brands. Let’s promote those brands, let’s wear those brands, so that that street is not only fucking very clearly two-way, to use the metaphor, but also has fucking people on it that support this with their wallets.

That is a hard question to answer. We’re just beginning to think about how we can unpack it and then do the right thing. But that’s a totally fair question. Listen to any five minute clip, and listen to how we’re talking, I think it’s very clear where that vernacular is coming from.

In your New Yorker profile, you discussed some of the bigger issues surrounding consumerism, and their relations to looting. (“We don’t weep any tears for the Carlyle Group, dog,” Schlossman said, referring to the shadowy private-equity company that purchased a fifty-per-cent stake in Supreme in 2017. “You told these kids that these items were more valuable than anything else, so don’t be surprised when the reckoning comes.”) How will that kind of thinking apply to the show moving forward?
LAWRENCE: This show has always 1000 percent had a healthy distrust of capital F fashion and capital S streetwear—the industries themselves. Is there any kind of ethical consumption under capitalism? We’re not here to [answer] that. We are here to listen. If you are going to cop jawns and you are going to be part of this—you can be conscientious. The planet is still fucking dying and fashion is still one of the most dangerous polluting industries across the board up there with fucking fossil fuels. I can’t say we’re going to solve that. If you’re listening to a fucking fashion podcast, you’re definitely copping jawns. But there is a way we can direct those dollars, not just to actual tasteful cool shit, but to the support of Black-owned businesses as well.

JAMES: We’ve always tried to dismantle hype. We’ve always asked people, do you really want this thing? It’s critical thinking. “Why do I feel this way? What is behind the action I am about to take?” Critical thinking has always been a throughline of the pod. And also encouraging self betterment through curiosity and discovery.

Critical thinking, absolutely. In your conversation with Patia you mentioned that “racism is prejudice plus power,” which is actually not something I’d ever heard before, and has really stuck with me since.
JAMES: That’s my Vassar education at work!

One final, dumb question. You've joked a lot about the rise of the loafer. How bullish are you on the sneaker's place in the culture in the immediate future?
JAMES: The goal is for people to stop accepting sneakers that range from straight dusty ass to ho-hum mediocrity as the only feasible options because that's what exists on a superficial plane, and to realize there's a bunch of other interesting shit out there to diversify your footwear.

LAWRENCE: [But] “the culture,” as it stands, is completely aesthetically bankrupt so no, I do not see sneakers going anywhere anytime soon. I think we've come to terms with that. We'll still be yelling into the abyss and shouting at clouds. The upside? More loafers for us.